The Philadelphia Cricket Club’s St. Martins course was nicely suited to Bill Geisler’s game. The Winter Springs, Fla. native and current president of the Society of Hickory Golfers, claimed the winner’s trophy in the 20th playing of the National Hickory Championship.  In the Open Division, Geisler finished with a 157, three clear of second place champ Seth Lomison, of Pfafftown, N.C.; and seven shots ahead of third place Steve Simer of Madison, Wis.

The venerable old course, site of two U.S. Opens (1907 and 1910) was designed by Willie Tucker in 1895. The NHC visited the PCC once before, in 2013, and was contested under a heavy, day-long deluge spawned by Hurricane Andrea. Andy Just of Jefferson, Ind. prevailed then, in a one-hole playoff over Bobby Sly of Kingston, Ont., Canada.

Young stars in the 2017 field included NHC veteran Gillian Alexander of Carmichaels, Pa.; the aforementioned Lomison; and Garrett Beaver of Export, Pa.; Marsalis Davis of Liberty, N.C. (yet in his teens but by now a wiley NHC vet); and Tim White of Alexandria, Va.

NHC Czar Pete Georgiady promises more news to come, but sends the results and a photo of Bill Geisler. Click here for the results sheet.

With a return to the Oakhurst Links currently in doubt, the NHC seems to have found a favorable home in the historic old course in Philadelphia. Congratulations Pete and contestants on a fine outing for the 20th playing of the National Hickory Championship. 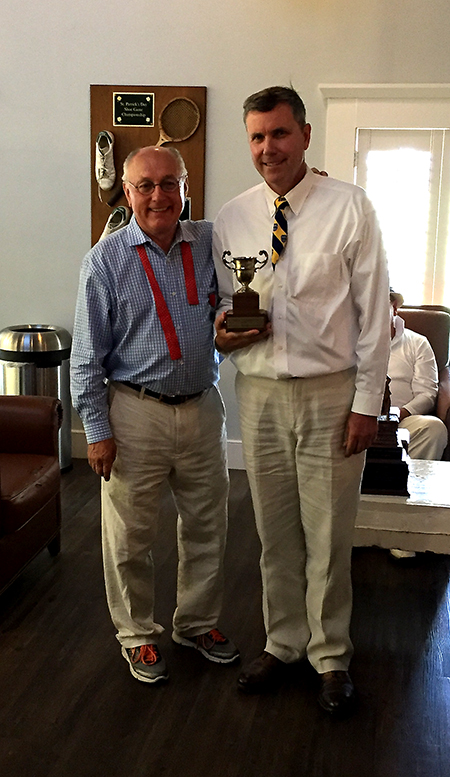